Why Do Baseball Players Use Wooden Bats?

It’s one of those great afternoons that you got tickets to the ball game. After you’ve finished your tailgating party and closed up your baseball umbrella, you may be sitting down in your stadium seats ready to watch the game. You may even sit back while you’re watching that batter wind up and wonder to yourself wait a minute, what’s with the wooden bat? 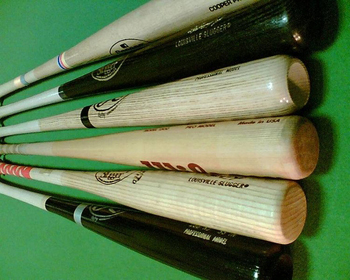 We’ll let little leaguers keep their metal bats instead of wood ones, so moms and dads on the sidelines under baseball umbrellas won’t have to fear for their lives!

Now, if you’ve played baseball when you were young you might remember using a metal bat. I remember as a kid loving that PING noise my metal bat made as I was grand-slamming it into a fast ball my little league pitcher was throwing my way. Looking back, even if you tipped the ball with a metal bat it would go rocketing over the fence!

So while you’re watching that major league game I bet you’ve thought more than a few times about why professional players don’t use what we’d use back in the day. Heck, even college baseball players still use metal bats! What’s it about the major leagues that makes it different?

This answer might seem a little obvious, but think about it! Just like I pointed out from my early years, metal bats have a way of making the ball fly. If major league baseball players used them we’d just be watching a game full of home runs. Actually, I might like it! Well, It might seem kind of cool when you first think about it, but don’t we want our pros to really show some skills to muscle a home run?

That’s why wooden bats have always been a staple for pro baseball players. We’ll let little leaguers keep their metal bats, because moms and dads on the sidelines sitting under baseball umbrellas won’t have to fear for their lives!

When it comes to major league players however, wooden bats makes sense. Wooden bats take more skill to use because they’re slower to swing, and heavier. Also, wooden bats have fewer sweet spots, which means that you have to really work on your swing to be able to make contact with the ball in just the right way to really let that ball fly. When you use a wooden bat its just that much harder to power a home run, so wooden bats ultimately make players work for that victory lap around the field.

Also, can you picture our batting statistics? With aluminum bats there would be such a spike in batting averages that baseball simply wouldn’t be the same sport! Right now we can track how well our pros are doing compared to the Babe Ruth’s and Micky Mantle’s that were slugging homers back in the day, because wooden bats have been used since baseball was invented. But If we suddenly switched to aluminum bats our pros could no longer be in the same running as the big names from the past. I think we want to keep an eye on how our pros are stacking up against the all star legends, or else we’ll never know what is really impressive playing anymore!

Safety on the Sidelines

Do you really want to be risking your life every time you go to a major league game? Metal bats would have those home runs clocking in at a much faster pace. Wood allows for a slower speed once the ball is hit, which means we don’t have to duck under our seats every time a batter makes contact! Just picture heading out to a major league game and having to hide every time the batter winds up… that’s not a very pretty picture!

Also, we tend to like our professional baseball players and not want to see them get hurt. Using wooden bats allows more safety for the defending infielders since balls aren’t flying at the pace or frequency they would if batters were allowed to use metal bats.

Wooden bats are cheaper to manufacture so when a player breaks a bat its easy to replace. Not that we were really fearing for major league baseball’s financial security, but hey, I won’t begrudge them the few extra dollars.

Lastly, they’ve been using wood throughout baseball history. Playing it safe under your baseball umbrella also makes sense. Stay cool and keep the tradition alive! Baseball is, after all, America’s favorite past time!

6 Comments on “Why Do Baseball Players Use Wooden Bats?”