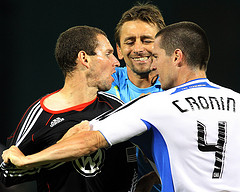 So last night I was watching this intense soccer game between two notoriously rival teams.  I was glued to the television screen because the intensity of the game just kept escalating.  You know what that’s like, watching a game with unfair calls and watching the ball miss the net by just an inch.  The ultimate ingredients for drama to ensue.  The game maintained its excitement until I noticed a player from Team A walking ferociously towards a player from Team B.  Okay, here we go, some words are about to be exchanged, oh great!  As I anticipate face to face confrontation I quickly recognized player A tilting his head back and jerking it into player B’s face.  Ooouchh! What just happened?  Have you ever seen such behavior on a soccer field before?  Appalling don’t you think?  Whatever happened to sportsmanship?  Well, as a result of overly aggressive behavior and obscenities making frequent appearances at World Cup level matches, FIFA is putting its foot down by penalizing players for exhibiting this behavior.  This is especially important for young athletes and their peers because World Cup players, whether they like it or not, are role models.

Take a tip from youth soccer professionals who wrote about this very subject in one of their recent blog posts.  I’m sure kids and their friends enjoy watching soccer matches of all levels and they develop a preference for certain soccer teams.  They will often analyze their favorite team’s games and learn techniques and behaviors from world class athletes.  A couple techniques that should not be condoned include spouting out obscenities and behaving less than sportsman like.  Behaving in such a manner not only jeopardizes the chances for success for the individual player but also for the entire team.  Do you think it is really worth it for your player to receive a red card, getting kicked out of the game, and potentially losing the entire match for their team for cursing or head butting another player?  Here, let me give you a hint, no!  As a parent or coach, both you and your player can truly benefit from reinforcing the importance of sportsmanship.  Sportsmanship is a critical characteristic that is needed for every aspect in life such as sports, school, and work.  In fact, Youth1 states, “the sports arena is where kid’s learn life’s fundamentals that will help them in all aspects of their lives, not just sports.”

Building valuable characteristics is one of the wonderful gains from participating in sports such as soccer, baseball, softball, or lacrosse.  Playing fair and treating other players with respect is critical for the success of your players team as a whole.  Also keep in mind, the importance of sun safety.  Make sure to stay hydrated and take breaks from the sun under a JoeShade UV soccer umbrella.  Not sure where to find the original, quality, and reliable UV soccer umbrella?  Visit www.joeshade.com for more information on this and other interesting stories on sports, outdoor life, promotions, and health.