Spit Out Your Chew and Play Baseball

Can baseball do without chew? What do you think? 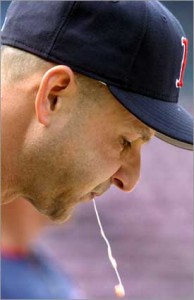 Growing up a baseball player and watching countless baseball games, one thing I always noticed was the little circular tin in player’s back pockets.  I also noticed the big nasty lump in their bottom lips. What gives? Was this a little side snack they packed in their cheeks for a long day at the park?

Take it from me, I was so glad to finally discover the big cheek mystery but was shocked to learn it wasn’t a rice krispie treat lounging around for a random bite. Younger kids have no idea what’s going on when they see this. Right around the time kids start getting serious about baseball, usually junior high or high school, they also learn about chewing tobacco, dip, lippers, or any other clever names kids call it these days. But don’t ask me why there’s a connection with baseball players, although have you ever known a more superstitious bunch of athletes? Maybe they think it has something to do with playing better. But seriously I don’t know why players like to chew tobacco. Personally, I could come up with better things to chew like sunflower seeds, peanuts, gum, gummy bears or popcorn.

Like any sport, what baseball players do and chew directly influences their young fans. Whether athletes wants to admit it or not, they are role models, although some athletes don’t want the responsibility. Former NBA star Charles Barkley once did a commercial saying, ” We are not role models.”  Umm, excuse me? Even though I like ya Chuck, you are wrong! The definition from dictionary.com of a baseball role model is a person whose behavior, example, or success is or can be emulated by others, especially younger people.  So if someone is emulating what you do, you have a responsibility to be aware of your actions.

That is why in my humble opinion chewing tobacco should be banned from the game officially as done in the Minor leagues. Players can chew tobacco on the way to the stadium, in the locker room, in the bathroom, or even on a first date if they so desire, but for three hours during a baseball game it’s more than a fair compromise to lay off of the chew.  Baseball players don’t realize that they’re making chewing tobacco seem like a cool and normal thing to do when it’s clearly not. If the number of high school kids using chewing tobacco keeps rising we are going to have a lot of problems.  What if Lebron James and Kobe Bryant got to smoke cigarettes during their games?  I’d bet my left leg that cigarette smoking would increase faster than gas prices in Chicago.

Popular or not, chewing tobacco is a nasty habit that has many health risks too.  Learn more important health tips on how to keep sun protected with JoeShade baseball umbrella. It’s an ideal family umbrella at little league baseball games, softball, soccer, and lacrosse games. Let’s keep our athletes, family and friends safe from the sun’s UV rays at www.joeshade.com.