I think we’ve all seen those parents who get too carried away by a children’s soccer game. Everyone has seen that parent who looks like Will Farrell’s character in Kicking and Screaming: running up and down the field, shouting, and looking like they’ve drank way too much coffee that day. It’s not a pretty sight. If you’re a first time sports parent it can be hard to navigate when you’ve crossed a line in sideline conduct. So here’s a list of the 4 worst habits that you should strive to avoid this sports season. Eliminate these and you’ll be cool, calm, and collected, and ready to enjoy the game!

Being Unfriendly to Other Parents 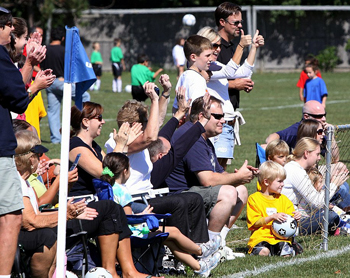 New soccer parent? Don’t complain about the weather – get a soccer umbrella and keep cool!

One of the worst breaches in sideline etiquette is when a parent refuses to interact with the other parents on the sidelines. Just like your child, you’ve signed up to be a part of a team. Parents, grandparents, and siblings are going to be there every week cheering on the team with you, so make sure to scout out a seat with your portable soccer umbrella and be ready to chat! Introduce yourself, and watch how the game will keep you talking! Also, since you’re a first-time sports parent you’ll find some seasoned veterans on the sidelines who can tell you what to expect from a team. Having a support system is great and will keep you informed about the schedule and any questions you could have about the team.

Something that’s just as bad as being silent on the sidelines is a parent who won’t stop yelling! Having a negative attitude towards your kid’s playing, your team’s playing, or even the other team’s playing is not showing good sportsmanship. So make sure to keep it positive when it comes to your cheering. Everyone makes mistakes and most of the time kids know when they’ve done something wrong. If you feel yourself getting worked up, take a breath, stretch out under your portable soccer umbrella, and remember it’s only a game. Keep it constructive and your little soccer player will love having you on the sidelines!

Complaining About the Weather: Get an Umbrella and Keep Cool!

We’ve all been to a game where it has hit 95 degrees, and you’re roasting. Maybe it’s the reverse and it’s sleeting on a crisp spring day. Parents tempers can get short and people can start to complain. But remember, that’s when your child needs you most! Showing up to as many games as you can is really important when you’re a sports parent, and your child will appreciate every minute of your encouragement on the sidelines. So break out that UV soccer umbrella that will protect you rain or shine, and be ready to shout some encouragement.

Forgetting to Check the Schedule

No one appreciates when a player shows up late, or even misses the game all because of a simple scheduling error. Always double check before you head out the door so that your not beating yourself up later. This is an easy mistake for first time sports parent to make, and is not a fun learning experience. If you have extra time while you’re sitting under your soccer umbrella before the game, try entering the dates in your phone and you will really be thanking yourself later. Speaking of schedules, the most important day on that schedule is your snack day. Kid’s love their half-time snack, so remember to set a reminder on your phone for that day, or to highlight that day on the calendar.

Finally, remember that bringing a JoeShade soccer umbrella to the game is a surefire way to be ready to sit it out on the sidelines this season!