Baseball Players Are Sporting Tighter Pant These Days, And for Good Reasons!

Back in the day, when baseball became a professional sport, players’ pants looked a lot different. Believe it or not, if you look at old footage you’ll be surprised to see the pros wearing baggy flannel pants!  Today, the pros would not be caught dead in flannel pants!  Trust me on this one!  But in the early days, flannel was the typical baseball uniform! 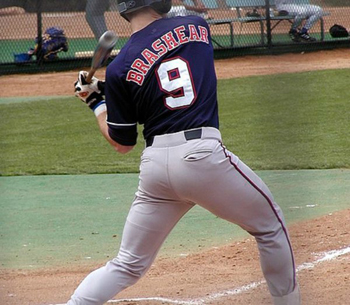 Today’s pros have ditched the drab and droopy pants, but as I’m sitting under my baseball shade umbrella at the game, I’m wondering what the deal is with those tight baseball pants.

I’m guessing that we all can appreciate that today’s pros have decided to ditch those drab and droopy pants. However, that doesn’t stop me from wondering what the deal is with those tight pants as I’m sitting out under my baseball shade umbrella at the game, and I’m sure I’m not the only one!  So let’s take a look at whats made players suit up into a tighter uniform!

Seeing all the pros run around in long pants on a 90 degree day can make you cringe. Imagine wearing that thick wool fabric that I mentioned players wore back in the day! Sweaty, scratchy wool used to be all the craze when baseball first came out. Believe it or not that was considered “active wear” back then! Finally, teams began to get with the program and offer double knit pants that were made of lighter, more breathable material and everyone was happy. It was certainly a step up from the heavy wool pants that players used to go through the trouble of ironing before a big game! That’s a flashback!

Just picture our major league players today breaking out the ironing board pressing their uniforms for the next game! Having a hard time picturing it? Yeah, me too. If you really want to laugh about what people were thinking during the switch to double knit pants read this quote from an article in the Herald Journal expressing some outrage about the new uniforms. The writer, Lewis Griswald, says, “I had some pajamas as a kid that looked like the new White Sox uniforms.”  He goes on to say, “The only good thing is they would be terrific to wear if you wanted to go over to your ex-wife’s house and scare the daylights out of her.” For the rest of the hilarious article click here. Clearly we can see from this writer that the subject of baseball fashion got pretty heated when it came to pants. However, there are some good reasons why our pros rock the tighter fit, besides wanting to make some females in the audience pay attention to the game!

Obviously, we can understand why those scratchy wool pants weren’t helping the pros to play a better game. However, that doesn’t mean you’re still not wondering why today’s baseball players sport a fitted pant. Let’s be honest, if you think about it, baseball uniforms are pretty different, in a good way, compared to other sports.  Soccer, basketball, and even lacrosse players are decked out in shorts. However, baseball is unique because sliding on the sandy infield would not work in shorts. Long pants allow players to steal bases without getting hurt, and also fit close to the body so players won’t be tagged out so easily. So next time you see a player going for the steal and sliding into second you’ll know he can easily make it because of his uniform, and of course, talent!  Ultimately, we should be pretty happy about those tighter fitting pants when we’re relaxing under our baseball shade umbrella, because those pants allow players to make slides and dives that have the ump calling “SAFE” and all of us cheering in the stands.