Hey, are all you football fans ready for this year’s Super Bowl? At JoeShade we can’t wait to see who’s going to win this year’s game. We have our bets, but know better than to start that conversation! This year the stakes are high between the 49er’s and the Ravens. We all know it’s going to be a tough match-up as both teams have managed to win every Super Bowl that they’ve ever played in! 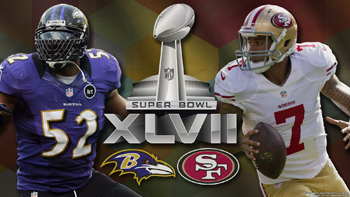 What does a sports umbrella and the Super Bowl have in common? Well, for starters, they give fans of both a great place to watch the game from!

Now, I bet you’re asking yourself what does a sports umbrella and the biggest game in football have in common? Well, for starters, they both have fans all over the country, and are looking out for fans by giving them a great place to watch the game from: one being the fabulous Mercedes-Benz Superdome and the other being a spot in the shade under a JoeShade sports umbrella that works rain or shine to protect fans from the UV rays on the sidelines. Yes, we’re a little jealous of all the fans that will be at the actual Super Bowl game watching it live, but we’re going to have our own party! Now, let’s break down everything that you will be watching for this big game on Sunday!

Even though Mardi Gras’ is going to have to stop the parades that day, the show will still go on through the entertainment lined up for this year’s Super Bowl. Alicia Keys is scheduled to sing the national anthem and has told the press that it will be an original rendition sung like you’ve never heard it before. We already know this girl is on fire, and we’re gonna have to pop open our sports umbrella if she delivers the heat with her performance.

On top of what promises to be an interesting rendition by Keys, the Super Bowl has also enlisted Beyoncé for the half time show. After her lip-synching at the President’s inauguration, everyone’s eyes are on her to deliver a live performance. Rumor has it, Beyoncé will be pulling out all the stops, hinting at the possibility of guest performers like husband Jay-Z, and the girls from Destiny’s Child (that’s right, get your TiVo ready for that reunion!). All together, there’s no doubt that Beyonce will be a triple threat and will be sure to put on one heck of a show.  Lastly, we can’t forget about the amazing commercials that are sure to surprise us this year.

The Two Teams This Year

The Ravens and the 49er’s have a strong Super Bowl history that’s going to make this game unlike any other! With the two Harbaugh brothers coaching their respective teams there is going to be some hot competition, and we’re not just talking about the New Orleans weather! We bet all those brotherly fights growing up have prepared them to work out some aggression in the Super Bowl game this year! Will the 49er’s keep up with their namesake and dig in for the gold, making history with what would really be a comeback kid story, or will the Ravens swoop down and steal the Vince Lombardi trophy out of their hands? The 49er’s are returning strong from their 10 year slump and are ready to dig in and win it, but the Ravens have a few Super Bowls under their belts and a defense that has only allowed an average of 17.1 points a game this season.

What You’ll Need to Keep the Party Going

Getting ready to host you Super Bowl party starts now!  The Superbowl is about football, but lets get real, it’s a lot more than that. It’s a party with tons of food and lots of people gathering together to watch a production. There will be new commercials, people cheering, a national anthem, a concert, and oh yeah, a football game.  So to be ready for this extravaganza, I have prepared the ultimate cheat sheet for your party.

For the lucky ones who actually get to attend the Super Bowl, that is a whole other kind of party!  The 2013 Superbowl will be held in New Orleans, need I say more?  What a great place for the Superbowl, with nice weather, great nightlife, tons of space for all the people, and a totally fun city! Tailgating will be prime for this event in this weather! You can bet that people will be out and about all day enjoying the atmosphere and the spirit of the game.

But the number one tip for all of you lucky sports fans is to not let all the trash talking, beer drinking, and burger eating distract you from protecting yourself.  The sun is dangerous at an event because let’s face it, protecting yourself from the sun is the last thing on your mind when you are trying to have a good time.  So make it easy on yourself and just pop open a portable sports umbrella. Not only does it have UV protection, it’s only two easy steps!  It’s as easy as counting the number of points your team scored in the whole game…1,2,3 OHHH! Just kidding. But you know what I mean, it’s so easy that you can stay protected and get back to talking up your favorite players and cracking open a nice cold drink in no time. You will be thankful you did in the long run, so that when you have to go home victory or loss, you wont take a red sunburn along with you!