We all have some habits when it comes to getting ready for a sports competition. Some people like to wear a good luck charm and others insist on sitting on the sidelines at the same spot under a portable umbrella, like JoeShade, when cheering for their favorite team. While these are some of the more common superstitions you can expect from any sports fan or player, there are five pro athletes who take habits to a whole new level! Some of these well known celebrity athletes have sworn that their bizarre habits have won them championships! And with wins under their belt it may be a hard point to argue! I’ll leave the decision up to you as you look at these players who can truly be recognized as the most superstitious in sports history.

5. Michael Jordan has game and a few interesting quirks

Believe it or not, the most famous basketball player who ever lived happens to have a few quirks that he attributes to his impressive career on the court. Jordan was known for sticking out his tongue while going in for a monster jam, but perhaps something you didn’t know about him was that Jordan insisted on wearing hiscollege basketball shorts, Carolina Tar Heels, under his Chicago Bulls uniform. In fact, Jordan was responsible for bringing baggie shorts back into fashion that we now see with many modern day athletes. Jordan requested that the Bulls uniform shorts cover his college shorts! Go figure, it really worked for him!

4. Serena Williams is a queen on the court

Williams is a phenomenal women’s tennis player and has won numerous gold medals during her career. However, while she’s playing in a tournament you may not want to stand too close to this mega star. Williams will wear the same pair of tennis socks for an entire tournament if she feels like they’re bringing her good luck. And, Williams always brings the same pair of shower sandals to court, and ties her laces in a specific way. Lastly, Williams is perhaps most famous for her habitual ball bounces she does before serving. Serena will bounce the ball five times before her first serve of the game, and two times before her second serve of the game. She is also known for challenging and arguing with the chair umpire and that only escalates her well-known temper. If Serena cooled down on the sidelines under a portable umbrella, perhaps she could focus more on winning the match.

Well, there must be a common trend with basketball players and their attachment to shorts, but Jason Terry takes the cake! Terry always wears a pair of the opposing teams’ basketball shorts, when he can get his hands on them, under his team shorts. He must feel that he’s dominating when he pulls his shorts on top of his competitor! Hummm, let me think about this one! During the 2006 NBA playoffs Terry couldn’t get a pair of the Miami Heat’s shorts, which he believes caused bad luck that led to his team’s subsequent loss! Really Jason?

2. Wade Boggs is a chicken man

Wade was a pro baseball player that went down in history for his superstitious antics he insisted on performing before and during the game. First, Boggs would eat a chicken meal before each game which he believed brought him good luck, and also earned him the nickname “chicken man”. But Bogg’s superstitions did not end there. He also had a strict regimen he performed to warm up before each game: he would take exactly 150 ground balls, enter the batting cages and begin practicing his swing at exactly 5:15 and would end his warm up by doing sprints at 7:17 on the dot. Now those are some extreme superstitions! I wonder what he was like at home? 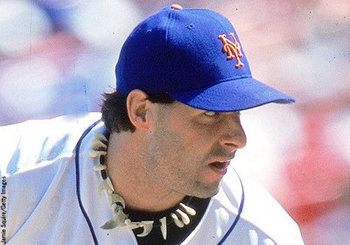 Superstition is nothing new in sports, from players who like to wear a good luck charm to fans who insist on sitting on the sidelines at the same spot under a portable umbrella, like JoeShade, when cheering for their favorite team.

Turk Wendell takes the number one spot on our list because this baseball player had by far the kookiest habits he followed in order to bring some good luck! Wendell would draw three crosses in the dirt before he took the pitchers mound to ward off bad luck. He also insisted that his contract always end in the number 99, which was his lucky number. But the craziness didn’t end there. Wendell would hop over the dugout line every time he entered the field, and would have to chew four pieces of black licorice when he was pitching. To top off his nutty behavior, Wendell would sprint back to the dugout after every inning hopping the line to brush his teeth! With his kookie list of habits Wendell by far takes the cake for superstitions. I wonder how many times he would open and close his portable umbrella in the dugout before he would get some shade?