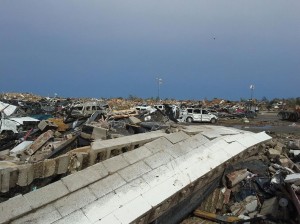 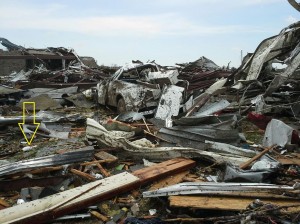 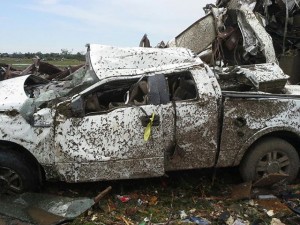 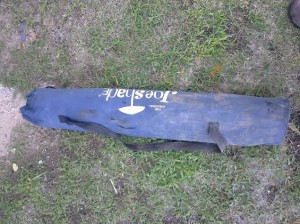 JoeShade is proud to provide a portable sun shade umbrella that’s not only incredibly versatile, but incredibly durable as well. While we designed our UV shade umbrella to stand up to just about any kind of conditions with ease, we’re always interested in hearing about the trials and tribulations our customers are putting their own JoeShade umbrellas through. We hear back from satisfied customers with great stories about what their umbrellas endure all the time, and every once in a while we hear about an experience we just have to share.

Recently, we heard from Ken Busch, a mechanical contractor out in OKLAHOMA who survived an incredible emergency tornado situation and discovered his JoeShade umbrella had done the same.

I just wanted to take a few minutes to let you know how much I appreciate your product. I spend a lot of time in the sun and heat installing and repairing air conditioning equipment. I have had my JoeShade for 2 years now, and use it almost daily in the summer months. On May 20th, 2013, I was at the Briarwood Elementary School when a deadly EF5 tornado leveled the school. Fortunately, no one was seriously injured at this school, but after making our way out of the debris, I was unable to locate my work pickup that was parked in front of the school. The following day, I contacted the auto dealer and asked if they could use the GPS in the vehicle to locate it, and they were able to. Upon finding my truck, I soon realized that nothing was left in the truck and there was nothing about the truck that was salvageable. It was barely recognizable. One of the tool boxes was still on the truck and I was able to access the tool box. It appeared that the tool box had opened at some point and then closed again, as almost everything was gone. As I climbed in the bed of the truck to remove debris, lodged under the tool box was my JoeShade! There are rips in the canvas bag and a couple of dents, but I am very pleased to say that my JoeShade survived a direct hit from an EF5 tornado. Thank you for designing such great products that are functional and durable.

Thanks for letting us know your story Ken!